Green is better than blue

I was going to start this by writing: "I've been using many themes on my system over the years", but when I thought about it, I've only really used three themes in the eight years I've been using i3wm on Linux. From Zenburn to Dracula to Nord. I've messed with these themes on my system over the years, like making color changes where I felt the theme could be improved for readability, or adding transparency which made themes look different. But basically it's been three themes, one after the other.

So after using Zenburn for a long time, I went to Dracula, which has been the theme of my choice for the longest time of the three. Only recently did I switch to Nord, which I got sick of pretty quickly and I didn't know why.

So I went hunting again, searching for a new theme that would scratch that itch. And after hours of searching and looking at different themes wondering why none of them felt right, it hit me. Blue. Most themes have some kind of blue highlight in them and I am done with blue. It's a cold color and I feel like I could use some warmth on my system.

After writing off Gruvbox for being too brown, I finally stumbled upon Everforest. 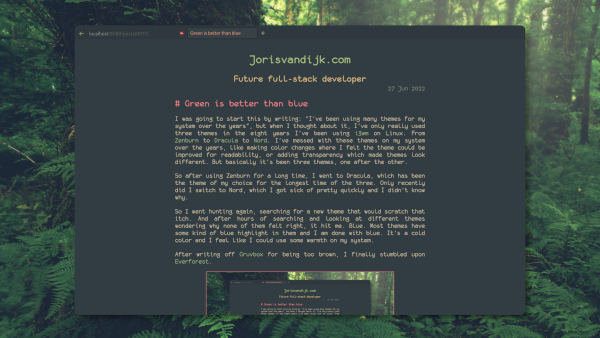 Everforest is a greenish theme which is incredibly easy on the eyes. It's very warm in its tones and it feels very fresh and soothing. It's going to be my theme of choice for the forseeable future. I have switched my entire system over to use it, from GTK to Firefox to Dunst and Rofi, VSCode and even Jetbrains Rider - all Everforest. I even made a new theme for my website, which you're currently looking at (at the time of writing this).

See my dotfiles if you're interested in using Everforest on your system as well. I highly recommend it!