My i3 config: Part four - Picom

So I have a decently interesting looking system right now. At least, according to people that see it. Granted though, most of them do not use Linux, so anything other than a bar with icons underneath a big field of more icons and a trash bin, looks interesting to them. 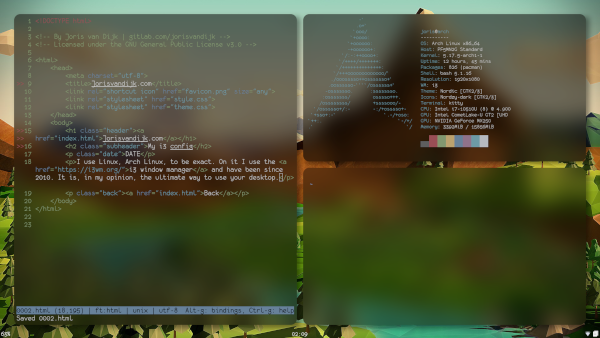 A big part of the look would undoubtedly be the transparency and the rounded corners. I've written about the window manager I use, which is the i3 window manager. You'd think that's the most important part of the look of my system, but you'd be wrong. Looks-wise i3 only adds the battery notification, clock and system tray at the bottom. Everything else is done by Picom, my compositor. The flavor of Picom I use is a fork of it made by ibhagwan. This version allows the rounded corners and "dual_kawase blur", which I fully use.

My current configuration file I've added below this post, so if you're interested in making your system looking like mine, you could. To get my current one, have a look here. Most of the configuration is decently self-explanatory, but if you have any questions, feel free to ask me.