I have a couple of git repositories on my system, which are used to back up all sorts of things to Gitlab. I have a documents one, a notes one, obviously my dotfiles and some school stuff. Keeping track of all of these is a bit of a pain, as you have to cd into each root git folder, check if there's been a change and if so, commit and push it. Ideally you're on top of things and remember to commit whenever you make a change and push those when it's convenient, but I find I usually lose track of these things. I need a way to have an overview of all, so Bash script time.

This is the script I use. It is a constantly evolving thing, so it may look completely different in the future. For now though, this does the job for me. A large part of this was taken from Matt Zabriskie's Github Gist.

So the way this script works is it checks the $HOME/.gitrepositories folder. This folder contains symlinks to all the repositories I want to keep track of on my system. When you launch the script it will present you with a list of your repositories and it will show you which has modified or untracked files. 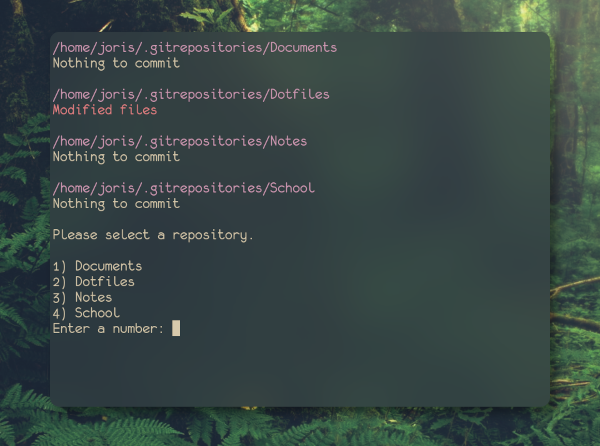 A couple of things to note. The first three lines of code are important.

This is the location of the folder with the symlinks to your repos:

The following is the terminal being used, the class it is given and the execute flag. I use the floatterm class to have the terminal window float in a set way. This is done through the i3 config file. Note there's a space after the -e:

And the last one is the name of the script as it's saved on your system. If you wanted to rename the script, you have to also alter this line:

Have fun playing around with the script and if you have improvements, don't hesitate to let me know! And as always, this may not be the most up to date version of this script. For that, head over to my dotfiles.